Channel Catfish are the most common catfish species in Ohio. They are often confused with other species of catfish, like Bullheads and Blue Catfish, due to their relatively high variation in color. These fish can be blue, gray, brown, and nearly black in upper body color. Their lower half is usually a white or cream color. Additionally, smaller individuals often have black spots or markings along their sides. Channel Catfish, like other catfish, are scaleless and get their name from the 8 whiskers around their mouth (also called barbels). They have a single bony spine in each pectoral fin and one in their dorsal fin which, if handled incorrectly, can deliver a painful poke (so handle with care)!

These catfish can live in a variety of habitats including large streams, rivers, lakes, reservoirs, and are sometimes stocked into ponds. Channel Catfish favor places with deep areas of water and rocky or gravel substrates with some type of current circulating the water. Catfish of all species are generalists, meaning they are able to tolerate a wide range of environmental conditions.

Channel Catfish can be described as the “garbage disposals” of any body of water they inhabit. They can be voracious feeders during the summer, especially when water temperatures are up near 80 degrees. Their diet is extensive and they are not picky eaters. Some of the meals on their menu include snails and other mollusks, crayfish, insects and their larvae, fish (dead or alive), and they will even eat some kinds of fruits and berries. Many people will use hotdogs, chicken liver, worms, and homemade “stinkbait” to lure these fish in. Catfish are highly receptive to chemicals in the water and use their chemoreceptors to find food. This sense is equivalent to taste or smell for humans.

The most common time to catch Channel Catfish is in the late evening when the sun is setting and after dark. These fish can put up great fights relative to their size, making them a popular sport fish in Ohio. Average sized Channel Catfish are typically in the range of 15-25 inches in length and weigh 2-10 pounds. However, these fish can grow to be massive in the right conditions; weighing up to 37 pounds and measuring 40 inches in length! 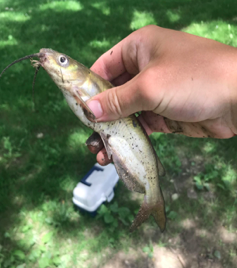 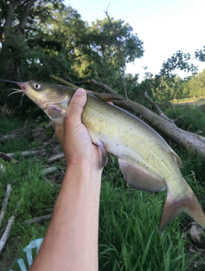 A note about the author: Brady Stevens is a senior undergraduate student at Malone University studying Biology. He also runs cross country and track for the Pioneers. As he works towards his Bachelor’s Degree, Brady has a job with Bass Pro Shops as a fishing outfitter. He loves to fish in just about any body of water he can find where there might be fish. Brady’s favorite place to fish is the Maumee River in his hometown of Toledo, Ohio. Further questions? Email Brady at bstevens1@malone.edu and follow his fishing page on instagram @no.bs.fishing.